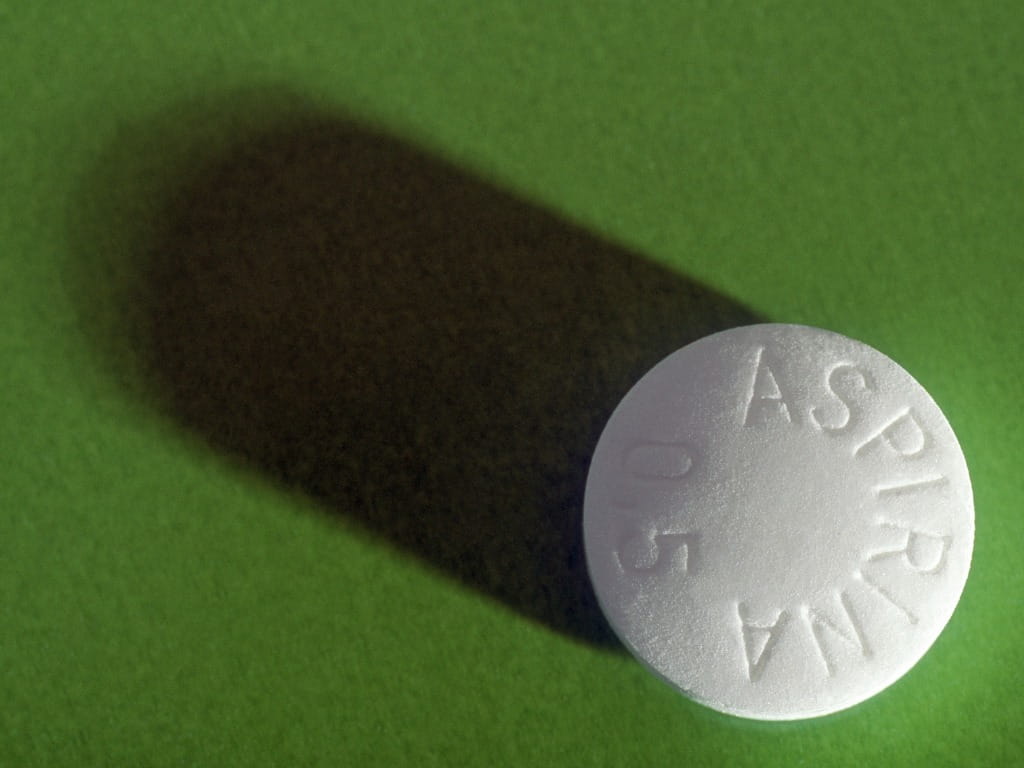 Aspirin is an over-the-counter medication used as an anti-inflammatory agent and for pain or fever relief. Low dose aspirin is used to prevent heart attacks and strokes in people with existing heart disease, and sometimes in pregnancy to prevent preeclampsia. Normal side effects include stomach upset and indigestion. Aspirin overdose can be life-threatening. 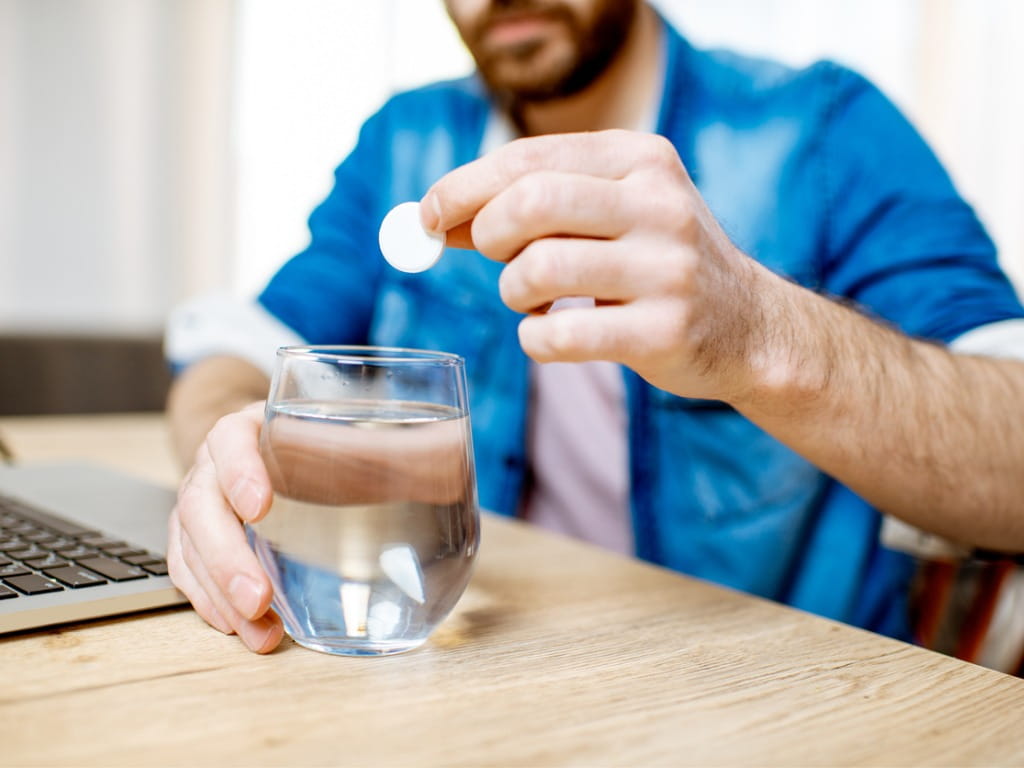 Aspirin, also known as acetylsalicylic acid (ASA), is a non-steroidal anti-inflammatory drug (NSAID). A synthetic modification of natural salicylates found in white willow bark, the name was trademarked in 1899 and the next year it became one of the first tablet medicines to be released. As a consequence of the World War I Trading with the Enemy Act and 1919 Treaty of Versailles, Bayer lost the trademark protection for aspirin, and since then it has become widely available as a generic drug.

What is aspirin used for?

Aspirin is used to help provide temporary relief for a variety of painful conditions, including headache, muscle aches, menstrual pain, toothache, and minor pains due to arthritis. Aspirin is also used to treat fever. Low dose aspirin is used to prevent heart attacks and strokes in people with existing heart disease, but is no longer recommended in older people without disease. Low dose aspirin can also be used in pregnancy to prevent preeclampsia when risk factors are present.

In April, 2022, the US Preventive Services Task Force updated recommendations for use of aspirin to prevent heart attack or stroke. Aspirin is no longer recommended for healthy adults 60 years of age or older to prevent a first heart attack or stroke.  This is because the risk of internal bleeding increases with age and aspirin’s benefits do not outweigh this risk in older individuals. People aged 40 to 59 years who have a high risk for heart disease and no documented heart conditions should not start aspirin without first discussing it with their doctor. These recommendations do not apply to people who already have heart disease or have had a stroke. Low dose aspirin can prevent heart attacks in people who already have coronary artery disease. If your doctor has recommended low dose aspirin, continue taking it. Full strength aspirin can lessen heart damage in those who are in the midst of having a heart attack. If you think you are having a heart attack, chewing 325 mg of aspirin is recommended while calling your doctor or an ambulance.

What are aspirin’s side effects?

Aspirin can commonly cause heartburn or upset stomach. Some people may also have slight drowsiness or a mild headache. An allergic reaction to aspirin can be serious, with hives, face swelling, or difficulty breathing. Taking aspirin every day can interfere with ability of blood to clot, causing easy bruising, nosebleeds, or tarry stools.

Is aspirin a blood thinner?

Aspirin can be considered a blood thinner. Aspirin has antiplatelet effects, which prevents blood cells from clumping together to form a blood clot.

What is the difference between aspirin and Tylenol?

Aspirin and Tylenol belong to different drug classes. Aspirin is a non-steroidal anti-inflammatory drug (NSAID) and Tylenol (acetaminophen) is an analgesic (pain reliever) and antipyretic (fever reducer). Aspirin reduces inflammation.  While Tylenol can alleviate pain due to inflammation, it does not reduce swelling. Tylenol is also preferred over aspirin for pain and fever relief in children.

Is it safe to take aspirin in pregnancy?

Low-dose aspirin has been used during pregnancy, most commonly to prevent or delay the onset of preeclampsia. It is safe and recommended in pregnant women who have one or several moderate risk factors for preeclampsia by the American College of Obstetricians and Gynecologists. When indicated, low doses are begun in the late first trimester and continued until delivery. Daily low dose aspirin has a low likelihood of serious maternal or fetal complications but there may be risks with higher doses. Congenital defects may occur if aspirin is used early in the first trimester. Using high dose aspirin during the third trimester increases risk of premature closure of a vessel in the fetus’s heart. Use of high doses for long periods also increases the risk of bleeding in the brain of premature infants.

Is it safe to give aspirin to kids?

Aspirin should not be given to children to treat fevers or viral illnesses, due to concern for Reye Syndrome. Reye Syndrome is a serious medical condition characterized by liver damage and brain swelling; death occurs in up to 40% of patients affected by the disorder. Since aspirin use is associated with the development of Reye Syndrome in children, the routine use of aspirin in children is generally not recommended. However, aspirin is sometimes recommended by physicians as a treatment for specific childhood conditions, such as Kawasaki Disease.

What are the symptoms of an aspirin overdose?

Aspirin overdose can be life-threatening and requires immediate treatment. One of the earliest symptoms is ringing in the ears or decreased hearing. Other early symptoms include deep or rapid breathing, stomach pain, and vomiting.  Later symptoms can include tremors, shaking, seizures, and mental confusion.

Is there an antidote for aspirin overdose?

There is no antidote that can be given safely at home for aspirin overdose. At a hospital, people may be given an intravenous injection of sodium bicarbonate to make the urine more alkaline. Aspirin is eliminated more quickly in urine when the pH is sufficiently high.  It is not possible to achieve this effect through oral sodium bicarbonate administration or by drinking other alkaline products. Activated charcoal is another treatment for aspirin overdose that may be given at the hospital.

What should I do if I take too much aspirin?

If you experience adverse or unexpected symptoms from aspirin, if someone takes aspirin unintentionally, or if someone takes too much aspirin, get guidance from Poison Control immediately. Help from Poison Control is available online at webPOISONCONTROL and by phone at 1-800-222-1222. Both options are free, confidential, and available 24 hours a day. If the individual has fainted or experiences a seizure, has trouble breathing, or is not responsive, call 911 immediately.

An 8-year-old boy ingested fifteen 325 mg tablets as a dare from his sibling. He began vomiting, then was brought to the hospital. While in the emergency department, he reported ringing in his ears and his heart rate was excessively high. He was given activated charcoal to swallow. His blood aspirin level was high and he was treated with intravenous sodium bicarbonate.  After 12 hours of treatment, the aspirin had cleared from his body and he felt much better.  He was discharged in good health the next day.
Share this:
Facebook
Twitter
Reddit
LinkedIn
Copy shareable link

Zhou B, Wang Q, Zhao Z, Feng X. A Systematic Review of the Efficacy and Safety of Aspirin When Delivered at Different Medication Times for the Primary and Secondary Prevention of Cardiovascular and Cerebrovascular Diseases. Ther Innov Regul Sci. 2020 Nov;54(6):1339-1348.

An 8-year-old boy ingested fifteen 325 mg tablets as a dare from his sibling. He began vomiting, then was brought to the hospital. While in the emergency department, he reported ringing in his ears and his heart rate was excessively high. He was given activated charcoal to swallow. His blood aspirin level was high and he was treated with intravenous sodium bicarbonate.  After 12 hours of treatment, the aspirin had cleared from his body and he felt much better.  He was discharged in good health the next day.