Pain Relievers: Ibuprofen, Naproxen, and Aspirin Know the Dangers and Side Effects 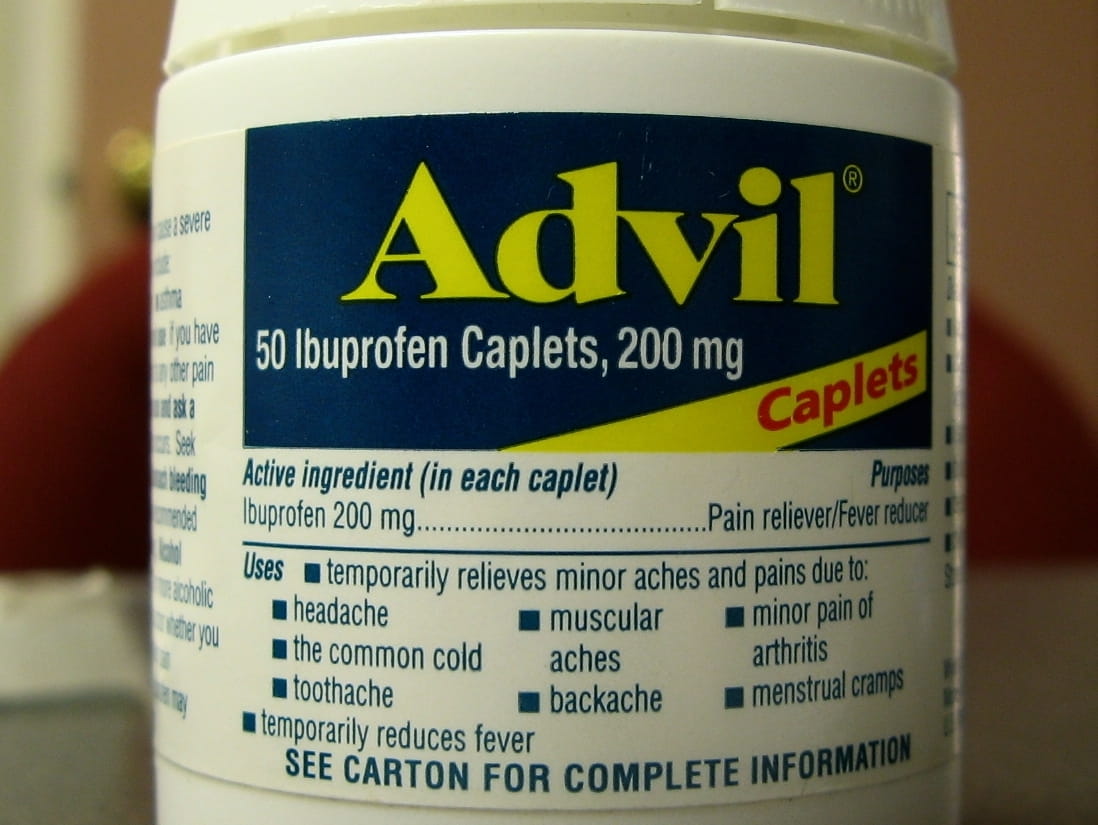 Ibuprofen, naproxen, and aspirin are non-steroidal anti-inflammatory drugs (NSAIDs). They are used to treat pain, fever, and inflammation. They are also found in combination products such as cough and cold medicines. An overdose of these medications may cause stomach upset, abdominal pain, and vomiting, kidney damage, ulcers, bleeding, seizures, and coma.

Non-steroidal anti-inflammatory drugs (NSAIDs) are a widely-used group of both "over the counter" (OTC) and prescription medications. They are taken for different types of pain, fever, and inflammation. Some of the common OTC brand names are Motrin® and Advil® (ibuprofen) and Aleve® (naproxen). There are many generic versions of these drugs, along with children's liquid products. Some cough, cold, and allergy medicines include ibuprofen to treat aches and fever.

Aspirin is an NSAID used for pain relief in adults. Low doses of aspirin are sometimes recommended for adults at risk of heart disease; it can help prevent blood clotting. Children should not take aspirin, especially if they have a viral illness; there is a risk for Reye Syndrome, a serious illness that causes brain and liver damage.

When giving these medicines to children, parents and care-givers need to set up a schedule. Otherwise, it's easy to overdose a child. Everyone who gives medicine to a child should be clear about who is giving which dose. There should be a system to mark down when each dose was given. It sounds like a bit of trouble, but it's important to keep track while you’re treating a sick child.

It's also important to read the ingredient label on medicines. It's easy for adults to overdose otherwise. For example, you might take ibuprofen for a headache and fever, and also take a cough and cold medicine. That medicine might contain ibuprofen as well.

Common side effects of NSAIDs include stomach upset, indigestion, or cramping. Usually the upset stomach goes away on its own after a short time. It's best to take these medications with a small snack or a glass of milk.

Although NSAIDs are typically safe medications when used correctly, they can poison the body if large enough amounts are swallowed. If too much medication is taken, NSAIDs can cause ulcers and bleeding in the stomach. Large overdoses may cause injury to the kidneys and even seizures and coma.

As with other medicines, some sizes of over-the-counter NSAIDs are sold in non-child-resistant packages. People who take ibuprofen or naproxen for arthritis or other chronic pain may buy non-child-resistant containers on purpose. It's important to lock these out of sight and reach of children. Don't take medicine in front of children. And don't call medicine "candy"!

NSAIDs can be very poisonous to household pets, especially dogs and cats. As little as one tablet could be a poisonous dose for a small dog or cat. Make sure to keep these drugs out of the reach of pets as well! Only NSAIDs that are prescribed by a veterinarian should be given to animals.

If you think someone has taken too much of any medicine, even an over-the-counter medicine, use the webPOISONCONTROL® online tool for guidance or call Poison Control (1-800-222-1222). The online tool or, if you choose to call, the poison specialist, will consider the amount of drug taken, the person's body weight and medical condition, and whether they have any symptoms. Sometimes, the person can safely be watched at home with poison control guidance. If emergency room care is needed, the poison specialist will work with the hospital to be sure that the person gets the right care. Both resources can help with common scenarios like:

A parent gave a 19-month-old child a half-full bottle of naproxen tablets as a rattle to play with. The bottle did not have a child-resistant cap. While the parents were out of the room, the child opened the bottle and swallowed some of the tablets.

In the emergency room, the child vomited and acted fussy. Fortunately, no other symptoms developed. Her symptoms were treated and she was observed for four hours. She recovered without any other problems.

A parent gave a 19-month-old child a half-full bottle of naproxen tablets as a rattle to play with. The bottle did not have a child-resistant cap. While the parents were out of the room, the child opened the bottle and swallowed some of the tablets.

In the emergency room, the child vomited and acted fussy. Fortunately, no other symptoms developed. Her symptoms were treated and she was observed for four hours. She recovered without any other problems.