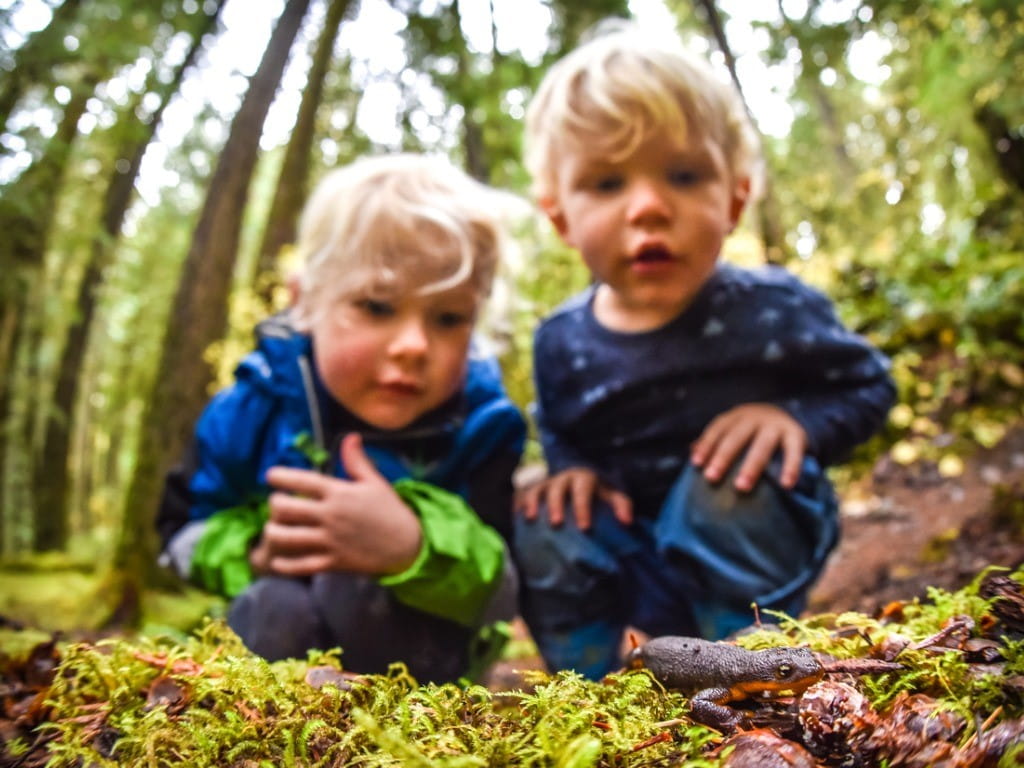 Amphibians—frogs, newts, toads, and salamanders—are equipped with defense mechanisms deserving of much caution. Some of the potent toxins they produce include digoxin, tryptamines, and tetrodotoxin. These can cause a variety of symptoms such as irregular heart rhythm, dizziness, cardiac arrest, and paralysis. Frogs and toads are also known to spread Salmonella to humans. 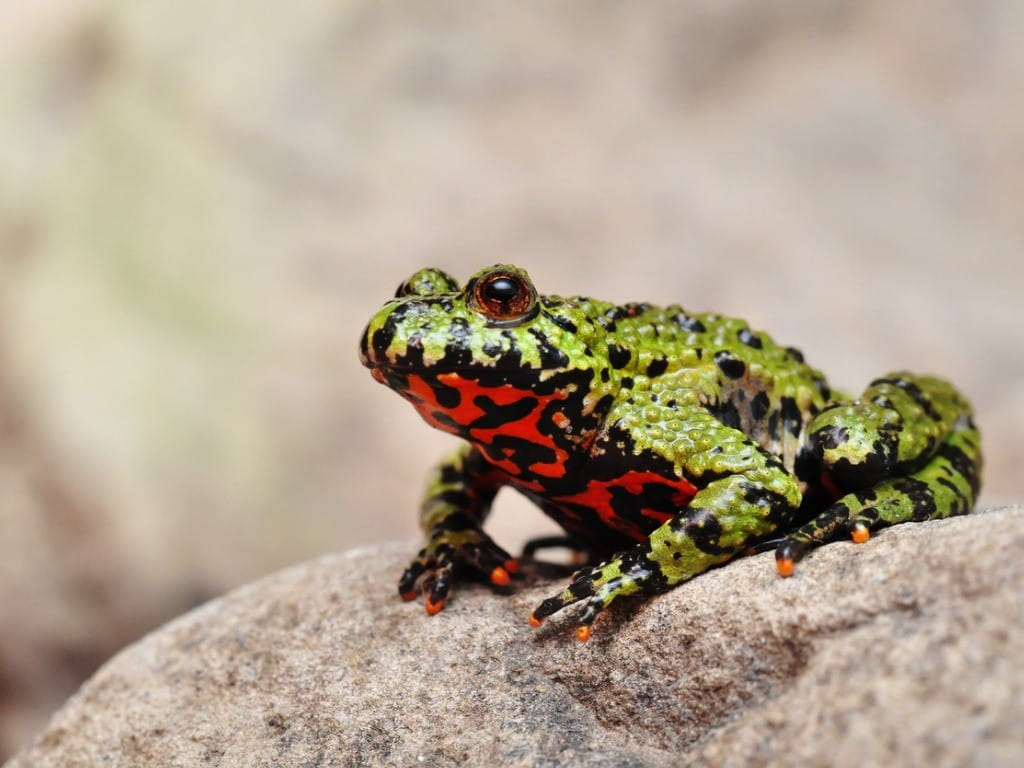 In fairy tales, kissing a frog might turn him into a prince. In real life, it can result in serious poisoning. When you think of the most feared poisonous animals, snakes are probably the first to come to mind and then maybe jellyfish, stingrays, and venomous spiders. If you hadn't thought about amphibians—frogs, newts, toads, and salamanders—you won't forget about them after reading this article. These fascinating animals are equipped with defense mechanisms deserving of much caution and fear.

Amphibians are cold-blooded vertebrates comprised of frogs, newts, toads, and salamanders (caecilians are amphibians but are not known to pose a risk to humans). The name amphibian comes from the Greek term amphibios, which means "double life." This is to reflect that they live in both land and water.

Toads are a type of frog, but not all frogs are toads. Frogs and toads look very similar, but there are some key differences. Frogs tend to have longer legs and smooth, moist skin while toads have shorter legs and dry, rough skin. The drier, rougher skin of the toad allows it to thrive on land while frogs are more likely to be found near water. A frog's longer legs allow it to hop, whereas a toad, with its slightly shorter legs, tends to walk on land.

Newts and salamanders are amphibians that look like lizards. Unlike toads and frogs, they have tails and much shorter legs. Similar to the toad and frog comparison, all newts are a type of salamander, but not all salamanders are newts.

What are their mechanisms of toxicity?

Bufo toads are found in southern parts of Arizona, New Mexico, California, and Texas as well as in Florida and Hawaii. They are better known by their common names like Colorado River toad, Giant marine toad, Sonoran Desert toad (Bufo alvarius), and cane toad (Rhinella marina). These toads have poison glands on their backs and behind their eyes that produce a toxic fluid with several kinds of chemical compounds. The toxic compounds can be found during all of the toad's life stages, including the eggs. The most important poisonous components in Bufo toad secretions are:

Although they are native to Eastern Europe and Western Asia, fire-bellied toads are sometimes kept as pets in the US. The fire-bellied toad (Bombina species) gets its name from its bright red, yellow, or orange underside. It secretes two types of toxins that can cause varying degrees of irritation in humans.

The most important poison in newts and salamanders is tetrodotoxin (TTX), one of the most dangerous toxins known to man. It acts on the nervous system and can lead to muscle paralysis. It's found in the skin, muscles, and internal organs of newts and salamanders, as well as in about 100 freshwater and saltwater animals, most notoriously the pufferfish and the blue-ringed octopus. TTX-containing newts are found in Oregon, California, and southern Alaska. Any brightly colored, rough-skinned newt or salamander likely contains TTX.

What are the symptoms associated with poisoning?

When in eyes or nose, Bufo toad secretions can cause severe irritation, pain, and tissue damage. Licking or swallowing can lead to numbness of the mouth and throat as well as severe and life-threatening effects on the heart as a result of the digoxin-like compounds and catecholamines described above. These effects include irregular rhythm of the heart, heart block, reduced blood pressure, and cardiac arrest. These severe effects can also occur after absorption through the skin.

Most exposures to fire-bellied toads occur in people's homes from their "pet" fire-bellied toads; typically, the secretions get into the eyes or on the skin. Contact with the eyes can result in intense pain, swelling of the eyelids, short-term visual changes, and infection. Itching and hives have been reported after skin contact. Severe, body-wide or multiorgan effects have not been reported in humans. In animal studies, elevated blood pressure, decreased heart rate, diarrhea, and damage to red blood cells have occurred.

Ingestion of TTX initially causes lip and tongue numbness, followed by numbness of the face, arms, and legs. This is followed by dizziness, drooling, and muscle weakness. It can quickly progress to paralysis of the entire body, including the respiratory muscles. Without treatment, death can result from the inability to breathe.

Who is at risk?

Anyone who is exposed is at risk. The innocent and curious nature of children and pets make them high risk, and we should always protect pregnant women, people over 65 years of age, and those who are immunocompromised. Anyone who handles an amphibian without proper training or precautions, eats them, or mishandles them in any way, is at high risk. Exposures resulting from dares or bets have caused deaths (see This Really Happened).

People in certain parts of the world—China and Southeast Asia in particular—where toad secretions have been used as folk medicine and as an aphrodisiac are also at high risk. Severe poisoning has also occurred in rural populations where toads and toad eggs were eaten due to food scarcity.

Are there other non-poison concerns?

Pet frogs and toads are commonly known to spread Salmonella to humans.

What is the treatment?

Decontamination is key, and it is the only treatment that can be done at home. Decontamination means removing the toxin by washing, rinsing, flushing, or irrigating with water. Do not attempt to induce vomiting or try to manage an exposure at home beyond decontamination without seeking advice from a healthcare provider. There is an antidote, but only for the CAS portion of Bufo toad secretions. This means that the care and treatment provided for poisoned patients is largely supportive and often provided in a hospital.

If you are concerned about an exposure to frogs, newts, toads, or salamanders, check the webPOISONCONTROL® online tool for guidance or call Poison Control at 1-800-222-1222

A 29-year-old man swallowed a 20-cm (about 8 in) newt on a dare. Within minutes, he complained of tingling of his lips, which progressed to numbness and weakness of his entire body over the next 2 hours. Although he stated that he thought he was going to die, he refused to be transported to a hospital. He then collapsed and went into cardiac and respiratory arrest. He was resuscitated and given respiratory support, but his pupils were dilated and fixed. A brain study confirmed that he had no brain function, and he was pronounced dead later the same day (from Bradley & Klika, 1981).

The trouble with toads: getting to the bottom of this toxic threat. New York: American Society for the Prevention of Cruelty to Animals; 2019 Jun 14 [cited 2020 Nov 29].

A 29-year-old man swallowed a 20-cm (about 8 in) newt on a dare. Within minutes, he complained of tingling of his lips, which progressed to numbness and weakness of his entire body over the next 2 hours. Although he stated that he thought he was going to die, he refused to be transported to a hospital. He then collapsed and went into cardiac and respiratory arrest. He was resuscitated and given respiratory support, but his pupils were dilated and fixed. A brain study confirmed that he had no brain function, and he was pronounced dead later the same day (from Bradley & Klika, 1981).