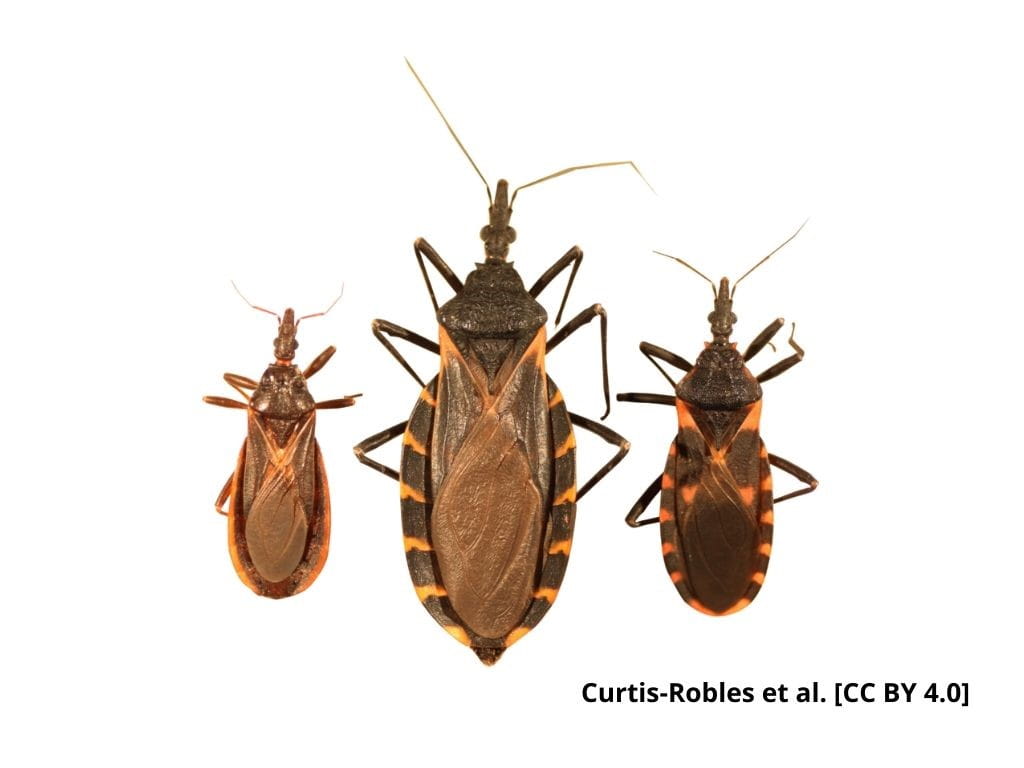 Kissing bugs can transmit a parasite that leads to a potentially serious illness called Chagas disease. Most cases of Chagas disease occur in Latin America. Although infection directly from exposure to the kissing bug is rare in the US, it is still important to take steps to prevent kissing bug bites. 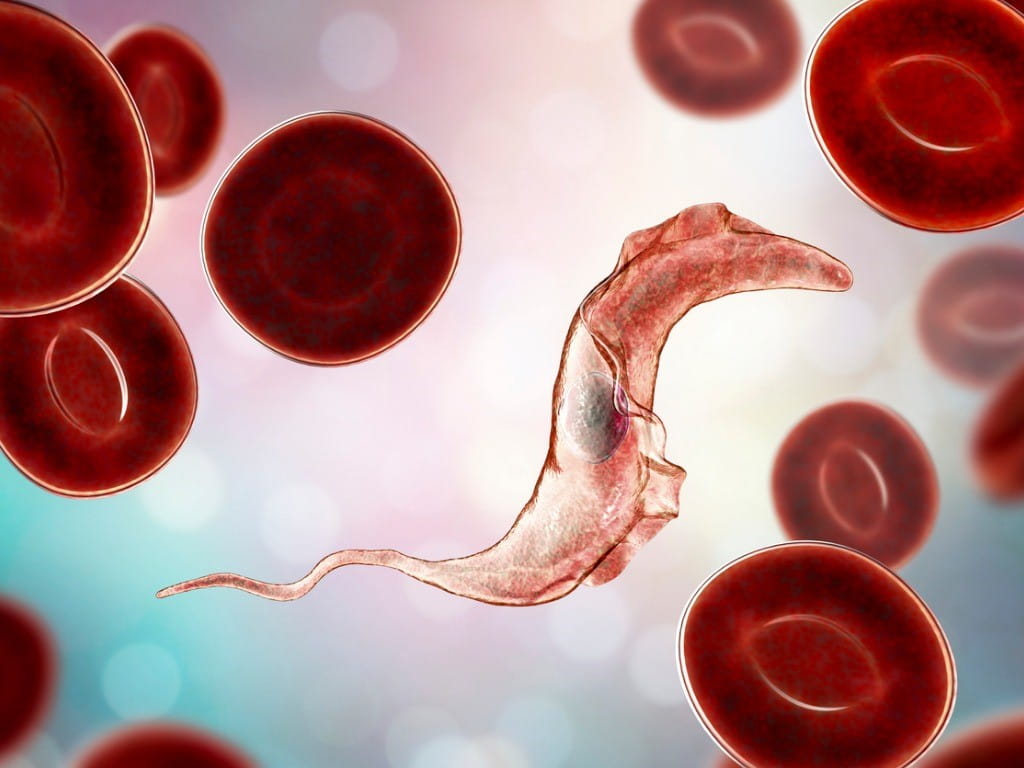 Kissing bugs are far from romantic. To the contrary, they are blood-sucking insects that can transmit disease. They are called kissing bugs because they prefer to bite humans on the face, particularly around the mouth and eyes. Like ticks, mosquitoes, and fleas, kissing bugs are important vectors of disease.

Kissing bugs carry a parasite called Trypanosoma cruzi, which causes Chagas disease. They obtain the parasite after feeding on an infected animal or human. The parasite is then stored in their gastrointestinal tract. The bite itself is not the actual mode of transmission. After feeding on the host, the kissing bug defecates on the person or animal. Contact with the feces and entry of the feces into any break in the skin can lead to the transmission of the parasite.

If that is not utterly un-romantic enough, kissing bugs are nocturnal, which means that they are active and feed on their hosts mainly at night. An unsuspecting host, after being bitten, might inadvertently scratch the area or rub their eyes or nose in their sleep, further rubbing the feces into the bite wound or transferring it to the eyes, nose, existing cuts, or elsewhere, allowing the parasite to enter the body.

Kissing bugs have cone-shaped heads and oval bodies and are either black or brown. They range in length from ¾ to 1¼ inches. They appear flat, and have characteristic orange or red stripes on their edges. There are 11 species of kissing bugs. They are endemic in Mexico and in Central and South America. In the US, they are found in the southern states. They live primarily outdoors near their hosts—humans, pets, rodents, birds, reptiles, and wild and domesticated animals. They are often found inside outdoor doghouses, chicken coops and other domestic animal dwellings, near nests and within rodent burrows, in brush and wood piles, and beneath porches. They can enter homes through cracks and holes. Substandard, primitive, aging, and dilapidated structures are highest risk, allowing easy entry of the kissing bug.

Although kissing bugs are present in the US, Chagas disease transmission here is very rare. Chagas disease (named after Dr. Carlos Ribeiro Justiniano Chagas, the Brazilian physician who first described it in 1909) is most common in Latin America, where approximately 8-10 million people are infected and where the disease is a major public health problem. It is much less common in the US, where about 300,000 infected people live, almost all of whom were infected during travel to or while living in Latin America.

Infected humans usually experience two stages of illness. An acute phase occurs within about a week after the exposure and lasts about 2 months. This stage can go unnoticed because there might not be any symptoms or the symptoms (e.g., fever and body aches) are vague and mimic other mild illnesses. The site where the parasite entered the skin might be red and swollen, particularly around the eyes or on the face, but this occurs in less than half of the people bitten.

Once the initial symptoms resolve, infected people can enter a chronic phase during which the parasites are hidden in the body, slowly causing inflammation and damage mainly to the heart and digestive tissues. Signs and symptoms in the chronic phase might not occur for 10 to 20 years after infection with the parasite.

Not all kissing bug bites will lead to an infection, especially in the US.

As with any insect bite, first things first—disinfect the area by washing it with soap and water or using a skin antiseptic. A local reaction, such as pain, itching, and slight swelling at the site might occur and can be treated with an over-the-counter topical steroid, antihistamine, or topical anesthetic. If your tetanus vaccination is not current, you should ask your doctor for a booster shot.

An allergic reaction can occur in some people who are sensitive to the kissing bug's saliva. If severe swelling, hives, or welts occur, it's important to immediately seek medical care.

The key to prevention is to keep kissing bugs from entering your home. Check for and seal any cracks, holes or gaps in the structure of your home (e.g., around windows, doors, walls, roofs, and in attics and crawl spaces). Remove piles of wood, brush, and rocks near your home. Kissing bugs are attracted to light; consider replacing outdoor lights with "bug light lamps," which are less appealing to insects.

If you're concerned that kissing bugs have invaded your home, contact a licensed, professional pest control operator for treatment.

If you find a kissing bug in your home, never touch it with your bare hands. A few US states are currently conducting surveillance of Chagas disease and might accept kissing bugs for testing if the bug was found inside a home or is suspected of having bitten someone. Contact your local health department to inquire further.

Given that almost all documented cases of Chagas disease in the US occur in people who have spent time in Latin America, it's important to focus prevention efforts during times of travel there. Avoid sleeping in substandard dwellings or structures that might have cracks, holes, or crevices, such as mud or mud-brick houses and those with thatched roofs. Use insecticide-treated bed nets and follow general precautions against insects.

If you're concerned about kissing bug bites, check the webPOISONCONTROL® online tool or call Poison Control at 1-800-222-1222 for guidance.

A girl in Delaware was bitten on the face by an unknown insect while watching television late in the evening. She and her family lived in an older home near a heavily wooded area. Her parents became concerned and contacted their local health department and requested assistance in identifying the insect.

The health department staff, along with the CDC and Texas A&M University's Kissing Bug Citizen Science Program, identified the insect as Triatoma sanguisuga (a "kissing bug"). This was the first confirmed identification of the kissing bug in Delaware. The analysis further showed that the bug had recently had a human blood meal; however, the girl who was bitten did not develop any ill effects. (from Eggers et al., 2019)

Find the repellent that is right for you [Internet]. Washington: Environmental Protection Agency; 25 Jun 2019 [cited 1 Sep 2019].

A girl in Delaware was bitten on the face by an unknown insect while watching television late in the evening. She and her family lived in an older home near a heavily wooded area. Her parents became concerned and contacted their local health department and requested assistance in identifying the insect.

The health department staff, along with the CDC and Texas A&M University's Kissing Bug Citizen Science Program, identified the insect as Triatoma sanguisuga (a "kissing bug"). This was the first confirmed identification of the kissing bug in Delaware. The analysis further showed that the bug had recently had a human blood meal; however, the girl who was bitten did not develop any ill effects. (from Eggers et al., 2019)